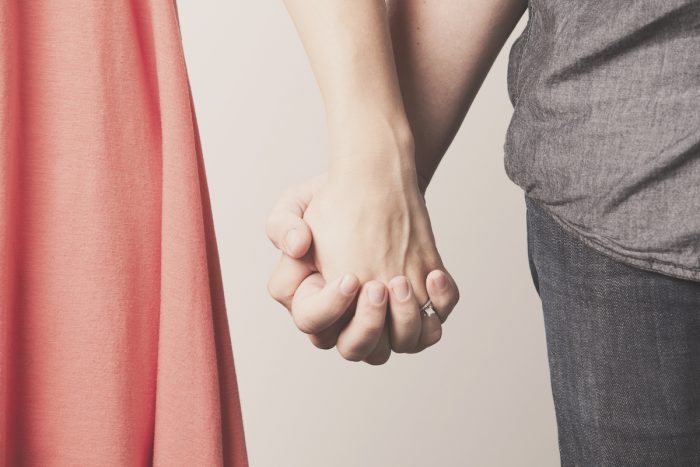 I have a good marriage. I hesitate to say great, only because I’m realistic and realize there is always room for improvement.

It’s only over the last couple of years that our marriage has moved into the “good” category. More specifically, since I came across the resource I’m going to share with you later in this post. But first, some back story:

One of my marriage missteps has been not communicating very well, if at all.

I used to be terrified of getting into a confrontation with my partner. I liked to avoid fighting.

You might be thinking, “Communication doesn’t need to mean fighting, Andrea,” and I hear that.

But straight up: I never knew how to communicate without getting defensive and/or standoff-ish until recently. 😳

My hubby was the same way. A good analogy is two bulls in a china shop. We were both volatile, and in pain – because anger comes from pain – and we’d just freak out at each other as soon as the conversation started down a path one of us was afraid of to delve into.

For example, “I want you to stop drinking so much,” translated to one of us thinking, “You’re abandoning me.”

Every “Can we talk?” was exhausting and difficult and scary and ugh. So much so that I’d do what I have done my entire life: suppress how I really felt until it boiled over into the worst C word there is in my humble opinion: Contempt.

Contempt for my partner meant eye rolling, shit talking, shit losing, and general disdain for all the ways in which my partner failed me and didn’t read my mind.

‘Cause that’s what a dude has to do, mind read, if I’m not communicating with him.

I’ve been in the same situation in every relationship I’ve ever had. I’d blame the guy for not being the way I wanted him to be when I’d never actually explained how I felt or what I wanted.

Sure, the reasons we broke up were legit. Most if not all of them were super unhealthy. But the build-up of contempt directly contributed to things always coming to a messy close.

It’s something I want to last because I love him. He is the only man who has ever loved me in my entirety. He loves me in spite of the trauma I carry, and the heaviness I struggle to find the source of.

My hubby values me, and his love has helped me learn to value myself.

So yes, he is a really good dude, and you don’t run from a guy like that. But a year or so ago I was feeling super unsettled. I was eye-rolling and generally feeling annoyed with him more often than not.

I felt guilty for feeling and acting the way I did.

I wanted to be able to express how I felt without getting into a screaming match.

And I knew I needed to honest with myself and him about how much a certain behaviour of his was hurting our relationship.

But I was so scared of what the outcome of my sharing would be. So I pulled my classic move: I didn’t say anything and tried to play it off like I was fine because I didn’t want to fight.

I minimized my right to speak up in my relationship because I didn’t know how to communicate without aggression.

But the stifling of feelings caused crazy loads of contempt, and I was having a really hard time being nice to him. Not in relation to the behaviour I was troubled by, but in relation to everyday stuff, like the way he did the dishes, his yawning (READ: loud) or the way he talked to me about his passion, music production.

It got to the point where I felt pulled to share my concerns with my therapist, and the look on her face when I explained what was happening said it all:

We were in dangerous territory.

This is the stuff that couples break up over, she informed me. Deep down I knew this, I’d just buried it beneath the hope that things would somehow change with no effort.

But I’d witnessed it happen many times before and knew it always ended with a breakup. However, this time I wasn’t interested in calling it quits.

It became clear to me that our inability to communicate with each other was ruining our relationship.

My husband and I are both part of the Missed Some Important Lessons During Childhood Club, particularly in relation to communication. Which is why we had some work to do.

We did the work, and continue to do it to this day. The ability to do it, however, didn’t happen without a bit of guidance.

There is a resource that is directly responsible for us being able to save our relationship.

Remember the therapist I spoke of? She gave me a handy little workbook that helped us, and while I can’t share it with you directly, I can do the next best thing: direct you to The Gottman Institute which created it and offers a condensed version of the principles for free.

There is a principle called The Four Horseman which is an analogy for 4 behaviors that are red flags in a relationship: Criticism, Defensiveness, Contempt, Stonewalling.

You might not even notice some of these behaviours existing in your relationship until you read this article. For example, I didn’t realize eye rolling was contempt and that it was causing a lot of issues for my hubby and me.

The Four Horseman offers antidotes to criticism, defensiveness, contempt, and stonewalling, too.

When your relationship is floundering, you often get really good at normalizing shitty behaviour.

That’s not to say you’re a shitty person, it’s to say that if you act like a jerk enough times it becomes normal to you and your partner.

That normalization can lead to big-time problems, and in some cases, bring an end to a relationship. 😞

After reading about The Four Horseman I realized that my husband and I weren’t communcating at all.   We were using criticism, defensiveness, contempt, and stonewalling to get our points across, and we didn’t even know it.

Thankfully, this concept from the Gottman Institute (link below) woke us up to the ways we were being less than lovely to each other and offered suggestiong on how to express our feelings in more productive ways.

It’s inevitable that your partner will piss you off, and that you will piss them off, too. Getting comfortable addressing issues in real-time, using words and phrases rooted in kindness and love is how you repair a relationship.

I know this from experience.

So get busy learning how to communicate so you can repair your relationship.

This kind of work takes courage, not only to share how you feel with your partner but to read a new concept like The Four Horseman.

It’s something new that could change your life for the better. For many of us, that last little bit about a better life is scary.

What will happen if/when things change? We don’t know! As crappy as the “same old, same old” feels, at least it’s known to us.

I’m here to say there is no shame in feeling afraid! Good or bad, change can be scary!

The trick is to act anyways.

Side note: The print out I got from my therapist appears to be the PDF version of the 4 Horseman guide in this image (which you can buy via the Gottman Institute store.) But the free version is great, too.

Anyone who has an interest in improving themselves is courageous and amazing in my book!

It’s so easy to normalize behaviors that get you nowhere close to happy. Kudos to you for taking the road less traveled. You’re setting a great example of self-compassion and self-love when you do this work which the world needs it!

That said, I hope this resource helps contribute to your life in a positive way. I’ve seen a huge turnaround in my marriage and other relationships after learning these concepts.

Let me know what you think of them in the comments.

And hey, let’s stay connected: Enter your name and email and I’ll reach out a couple of times a month with resources and empowering content.

Plus you’ll get my latest offering, Therapist Recommended Books To Help You Heal, for free!